Sue Harlow is an Americana-Folk Singer/Songwriter whose haunting vocals delve into the depths of what makes people real.  A thread of emotion runs through Sue's music and binds together life's moments.  Sue's songs cut down to the bone and take you on a journey of human heartache and heartbreak to hope and healing to joy and love.  It makes you feel something, a brief glimpse of what lies in all of us that carry us through what we call living, and this fragile thing we call life.

Sue started her musical journey singing in church.  Music she heard as a child, especially music that tells stories, has shaped her songwriting and love of music.   Influences include Emmylou Harris and Dolly Parton.

Recordings...
Sue is a member of BMI - Broadcast Music, Inc 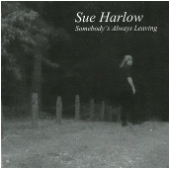 Sue Harlow sings deeply emotive, heart-touching songs that lay down the essence acoustic Americana folk, and to find out just how fundamentally her lingering evocative vocals will move you listen to the poignantly titled ‘Somebody’s Always Leaving’. These are songs that reveal the highs and lows of the human condition - touches of sadness added to memory, expectation bound up in hope, faith tempered by understanding – this album pours out its messages pure and strong. Vivid lyrics that tell untainted stories make songs that promote reflective smiles as well as realised tears - Sue has the gift to promote both. The evidence is crystal clear through songs like the honesty of ‘Coming Home’, the undeniable power of ‘Carry Me’ and the outpouring of pain in ‘You’re Not Here’ and for a sharply focused view of passing time ‘Faded Away’ will get you every time. And wait for the title track that closes the album – if you don’t well up, then search for your feelings because you’ve probably misplaced them.
‘Somebody’s Always Leaving’ sums up its content. These are songs that have leaving at their heart - places, people, times and situations – and because we all understand the impact of leaving, this album will mean so much to all of us. Website: www.sueharlowmusic.com
Review: Tom Franks
http://www.folkwords.com